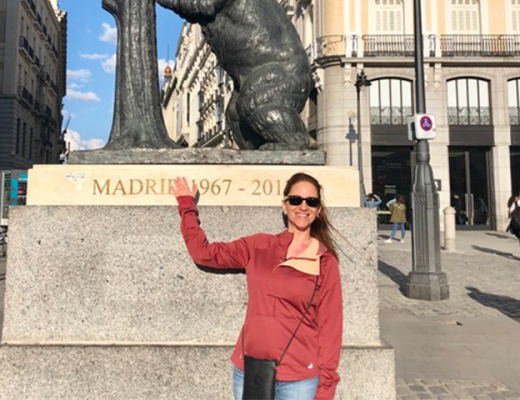 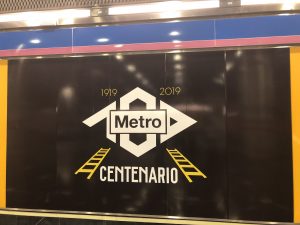 I used the subway to get to the city from the airport. The metro network is good and easy to master. This year is the 100th anniversary of the Madrid subway. While wandering around the city, I preferred to walk. The city center is compact. I took a taxi a few times; all the taxi drivers were friendly and they knew the directions.

First of all, I thought about renting a small apartment during my stay. However I could not find a renovated apartment in the center. When looking for a hotel at the city center, I came across the L & H Apartments and made my reservation online. It is right in the center, the room photos look fine and are it is relatively affordable. But beware if you choose this hotel: the Plaza Mayor building is more central but the rooms are old and very simple; also there is a bus stop right in front of the entrance, hence it is very noisy. The La Latina building is a bit further away from the center but the rooms are modern and better. I first went to Plaza Mayor, stayed one night and then switched to La Latina.

Before I left for Madrid, I found some nice local places to eat. When I was out on the first day, I made a reservation for two of my favorite places. The rest of the eating & drinking was spontaneous. 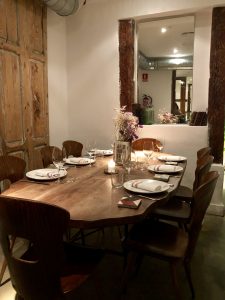 My favorite among the restaurants I ate is TriCiclo. A restaurant, run by three chefs. Javier Goya, Javier Mayor and David Alfonso, after years of friendship inside and outside the kitchens, decided to join forces and embark on a project of their own. The three chefs became partners and entrepreneurs to found “the restaurant we would like to eat”.  On July 2, 2013, after overcoming many vicissitudes, they opened TriCiclo in the Barrio de Las Letras.  The restaurant started with a team of 5 people, including the three partners. Now, it is made up of 25 professionals. TriCiclo is in the Michelin2019 guide. They offer simple, local food made of best quality ingredients which are skillfuly cooked. I would say; very good food made affordable. I had their tasting menu including; wood grilled scarlet prawn, artichoke from Tudela, and off the bone Simmental rib. The service is friendly and attentive.  Small place with a cozy ambiance.  A must go when in Madrid, of you want to eat good local food, prepared with sincerity. 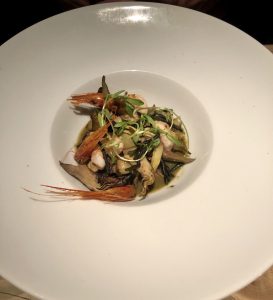 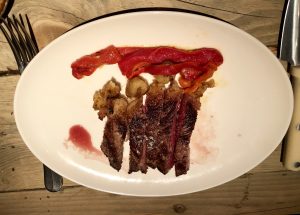 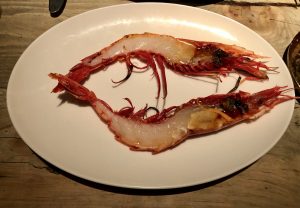 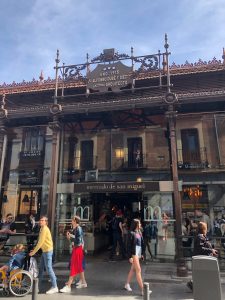 This is an elegant indoor area where you can find local Spanish delicacies together, very fresh and with good quality. You can take what you want from the various counters, and eat at one of the high tables of the market. Prices are not cheap, but the food is worth it. After I discovered the mercado, I ate here twice more and I was very pleased each and every time. I tried Oysters, “Cava”(Spanish sparkling wine), Paella, Calamari and “Jamón Ibérico” (the Spanish Ham): 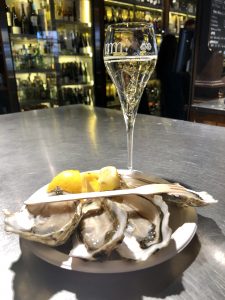 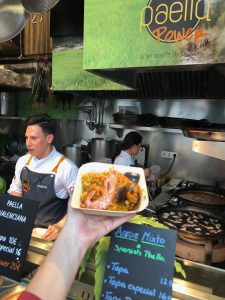 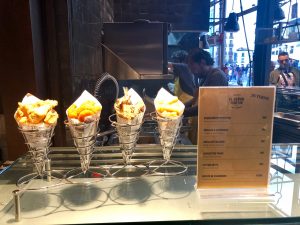 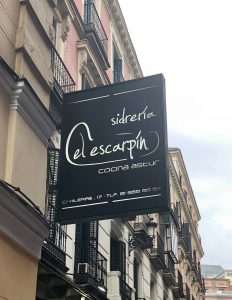 This is a very typical place to go in Madrid. I went there in the early evening and found myself a nice place by the window to sit down. After 8 o’clock in the evening, it became more crowded and by 9 it was packed. Spaniards usually do not eat before 9 in the evening. When you go to a restaurant, there are still new tables coming in at 11 o’clock. The reason I visited Sidreria El Escarpin was to taste Sidra Natural, a unique taste with a special way of serving, you can watch in the video below. I was very pleased to meet Sidra Naturale, but I chose to switch to red wine because the Sidra was a bit too sour for my taste. I have ordered a couple of typical Spanish dishes from the menu to try. They were all very tasty. I would recommend you to come here when you come to Madrid and have a pleasant evening with local delicacies and local people. 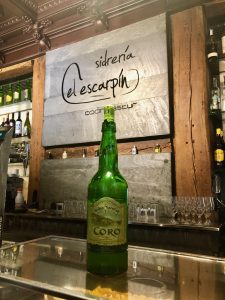 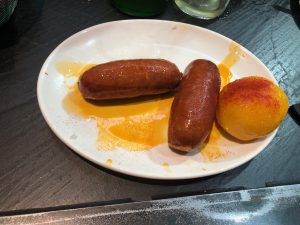 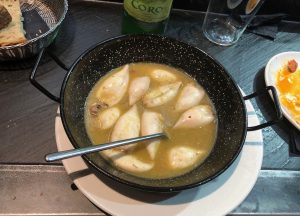 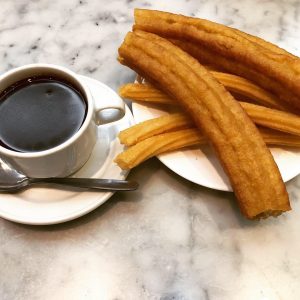 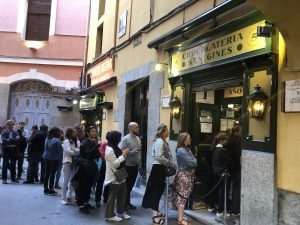 You shouldn’t leave Spain without eating “Churro”. Chocolateria San Ginés is a well-known place for churros. Of course, it is a very touristic shop and there is a very long queue in front of it. I could escape the queue by coming here after dinner and could enjoy my churros and  even take the video below:

Gin and Tonic the Spanish way

Also you shouldn’t go home without drinking a Gin and Tonic when in Spain. They use very big glasses. They put big cubes of ice in it, usually frozen with cucumbers inside. They bring the gin and the tonic in their bottles to the table, fill the huge glass generously with gin, and complete the rest with tonic. 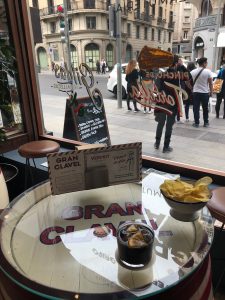 After the “Sidreria”, I also went into a “Vermuteria”. Spaniards love vermouth very much. You can try this spicy wine as an evening drink. The place where I went was Gran Cavel Vermuteria. It was a delightful place with good quality vermouth.

Things to do in Madrid

You can of course visit the Prado museum, but anyone could tell you this.  So in addition to my above recommendations, I would like to share a few special places that I liked very much visiting. 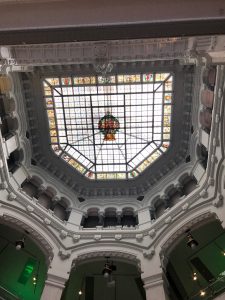 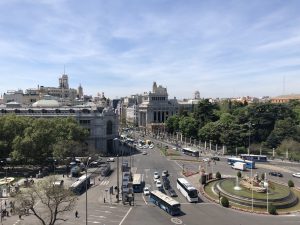 A very splendid and beautiful historical building. You should go inside and admire this well-preserved beauty. Don’t forget to take the elevator to the terrace at the top to enjoy the magnificent view over the city. 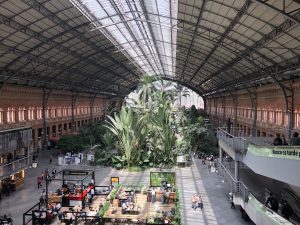 It is a place to see with its exceptional architecture, the huge plants inside, and the nice cafes and restaurants. 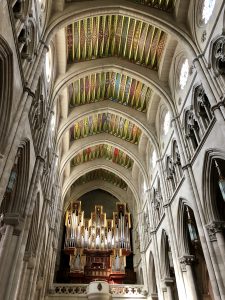 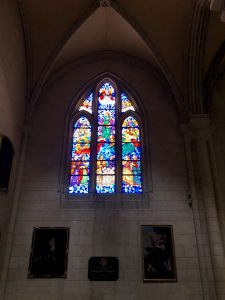 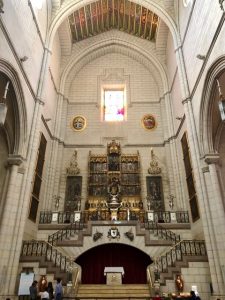 After wandering around the city all day by feet, it is very relaxing to sit at one of the benches and watch the magnificent ceiling and stained glass art in tranquility.